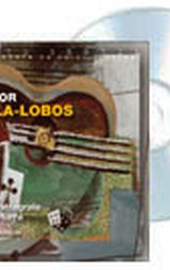 I often listen to Villa-Lobos’ Prelude no. 1 and Study no. 11 and never tire of them. They say the same thing, though they are different – the first is more lively, while the second is more dramatic.
The first piece, albeit in its brevity, says many things by valuing and making painful use of its own question, of repeating the theme and repeating the formula; and the second time it is not the same thing – it is much more doleful, it is like the confirmation of its own sadness. But then, as we have always said, it is better to be sad than desperate.
I have compared this Prelude to Schubert’s Death and the Maiden, because one can sense that there must be a tragedy, especially behind the first theme, quite easily recognizable from the fact that there is a string that sings. It is the painful song of the heart that, in silence, brims over, as tears that soothe the soul. Then, in the middle, in the tormented soul, comes the unexpected: the runs, the hypotheses that are made; they are short, carefree and without repetition. But only one thing is said. The only theme is that of life, it is something alive. Apart from this, repeated, there is only death, especially in the finale. Even death is part of the definition of life; in order to understand this you have to “study” Schubert or Dvorak’s Stabat Mater.